How music in Groningen finds you.

It’s February 23rd, 2021, and for the first time in years, the temperature is below zero for the sixth straight day. Groningen’s usually yellow, cobbled streets are white and where there once was water in the canals and lakes of Noorderplantsoen, now are people shuffling across the ice, trying to figure out what on earth has happened.

In most Dutch towns, this rumination would culminate in the dusting off of the old ice-skates or a newfound calling to become a sculptor of snowmen. But, occasionally, Groningen produces people with other ideas… For example, where some people would see a frozen-over pond as something to prosaically glide across, others see a stage and a unique opportunity.

Such was the premise on this February 23rd. Early in the afternoon, some of the many skaters on the northern border of Noorderplantsoen spy a group of four or five students lugging speakers and musical equipment onto the packed ice. Before long (and despite the persisting coronavirus-induced angst) a small crowd of around twenty people begins to form. This was the beginning of what was to be an unmitigated success for Ingo (@technobyingo) and a showcase of what Groningen has to offer musically and creatively in the best of times.

Ingo van Hezel, a master’s student at the University of Groningen, came up with the idea of a rave on ice as, six days earlier, rumors began circulating that the canals would soon be walkable. While most people with whom he talked about it initially dismissed his idea as a joke, the pieces quickly began aligning too perfectly to not see this as a genuine opportunity. The necessary equipment, including speakers, travel cases, cables, and a table, was provided by a local service for free and a friend’s workplace agreed to help by letting Ingo use a van for transport. Electricity was to be taken from another friend’s house next to the canal. As the day of execution drew close, it became clear that the canals wouldn’t be entirely frozen over yet, let alone be walkable, and so more creativity was called for. Conveniently, one of Ingo’s lecturers lives right next to the park, and, after a brief phone call, agreed to provide electricity.

So, with the stage all set, the music was ready to start. The twenty or so spectators soon grew into a hundred (Ingo’s previous performances had been for thirty people at most). It became eminently clear that this random act of music was releasing something within people that the pandemic had been suppressing for the previous year. Spectators were visibly shaking off the withdrawal symptoms from the lack of gathering and dancing. Waves were being made and news of the rave was being picked up by Sikkom and Dumpert, two local news networks. Not even warnings from the park patrol slowed the growth of the crowd. What’s particularly remarkable is the fact that even with the palpable excitement, the growing mass remained aware of the regulations and for the most part maintained social distancing. This continued right up until the moment where Ingo decided to close, which yet again proved to be the right decision since no less than five minutes later the police arrived to put an end to the festivities. By the time the fifty-minute set was over however, Ingo estimates that the crowd had grown to around three hundred heads, excluding those who listened in passing or had left early.

Ingo recounts the validation he felt upon seeing that more people than just him and his friends enjoy his music, and the thrill of being able to ease the malaise caused by the ever-changing coronavirus restrictions. In the six months since the ice rave, Ingo has continued performing at a handful of legal (and possibly illegal) raves and tweaking his live set, of which about 25% is improvised. While it’s still unclear in what capacity live music will be possible going forward, nothing close to the scale of the ice rave is currently in the works for fear of being fined by the police. With that being said, he is still diligently preparing for the eventual reopening of festivals, by working on his music, promoting himself on social media or by spreading his affinity for bucket hats with the recent opening of a web shop together with a friend.

If there is anything to be learned from this story, it’s that in a place as tethered to art as Groningen, music will always find a way to be heard. Whether it’s through the buskers who regularly serenade the Vismarkt, or more original initiatives such as the ice rave, music has continued to liven up the streets, even during the direst stretches of the pandemic. As such, it is equally inspiring to see how musicians have been coping with these stifling circumstances, and exciting to think about what unique ideas could come to fruition next. 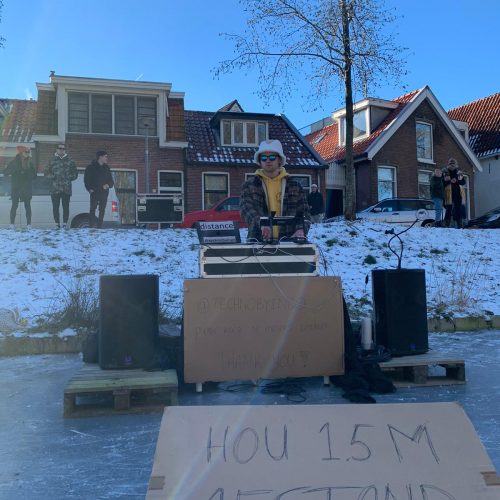